WHAT IS CRIO BRÜ? 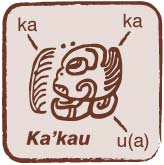 Crio Brü is brewed drink made from 100% cacao beans (also known as cocoa beans), roasted to perfection. Named after the most prized of cacao beans, the Criollo, Crio Brü will astound your taste buds with its complex chocolaty flavors and subtle aromas which come right from the cacao bean itself! It is 100% natural, 100% pure and is a fantastic and healthy coffee replacement.

Crio Brü is the ultimate superfood. It is low in calories and contains no sugar, no fat, no dairy, no sodium, no cholesterol and practically no caffeine, yet is extremely high in antioxidants, theobromine and a host of other vitamins and minerals.

Crio Brü is both a new drink and an ancient one. Ka'kao was an everyday drink of the kings and peoples of the great Incas, Mayans, Olmecs and Aztecs for hundreds of years, but was changed when the Old World met the New. The incredible health properties of cacao are currently lost in the process of making modern chocolate, but with Crio Brü, they are preserved. If you’re looking for a replacement for coffee, Crio Brü is just what you need.

Crio Brü is more similar to coffee in consistency than tea. However if made too thin, it could take on a tea-like appearance and flavor. We recommend brewing it for a more robust flavor. To learn more, see our How to Brü page.

HOW DO YOU BREW CRIO BRÜ ?

Crio Bru is made any way that traditional coffee is brewed. You can make it in a standard auto-drip machine with a permanent gold filter (not paper), or in a French Press.  See brewing guide for more information.

Depending on the type of cacao bean it is made from, it either contains little to no caffeine or trace amounts. The misconception that chocolate (cacao) contains caffeine is is based primarily on confusion between two similar alkaloids: caffeine and theobromine. The two stimulants are related and have similar chemical structures, but possess very different properties, effects and origins.

The natural, non-addictive energy boost you get from drinking Crio is a product not of caffeine (a common misconception), but from theobromine, an amazing compound that provides focused, mild, long-lasting energy, as well as acting as a natural appetite suppressant and fat blocker for those trying to lose weight. After a cup of Crio in the morning, you’ll feel great all day, without caffeine’s “jitters and crash” effects.

Unlike caffeine – which is harsh with a spike and following crash – theobromine works with your body, not against it, giving you a mild, long-lasting lift without making you feel nervous or jittery.

A study completed in 1993 (The Biochemist, April/May, 1993, pg. 15), definitively showed that chocolate contained 1.3% theobromine, by weight, up to 5.82% serotonin (an organic compound that enhances mood and energy, provides better mental focus, improved sleep patterns, less anxiety and decreases body fat), by weight, and no detectable caffeine.

Theobromine clearly has stimulant properties, so perhaps people reflexively attribute those effects to caffeine—even though many of the effects are fundamentally different from caffeine. Perhaps when referring to caffeine, they intend to reference an entire class of chemicals called xanthines, of which caffeine is but one example.

The amount of xanthines present in cacao is highly dependent on the variety of cacao bean that is used. There are three main varieties of cacao: criollo, trinatario and forastero. Criollo beans account for 1-2% of the world’s cacao, trinatario beans for around 10-20% and the rest are forastero. Criollo beans have the highest amount of theobromine but also contain trace amounts of caffeine whereas trinatario and forastero, typically, have little to no caffeine.

Theobromine and caffeine are similarly constructed types of pharmacologically active chemicals but with noticeably different effects. Theobromine is gentle, mild, has a slow onset, is long lasting and non-addictive whereas caffeine is intense, strong, fast acting, short lived and  addictive.

Crio Brü is 100%  pure cacao. A typical sample of cacao beans will yield anywhere from zero caffeine to 1,000 parts per million of caffeine (less than 1/20th of the caffeine present in coffee). Crio Brü is a great coffee replacement and provides long lasting energy and promotes whole body wellness without the negative effects found in other drinks.

No. Crio Brü is made from cacao which is not addictive.

IS CRIO BRÜ HIGH IN ACIDITY?

Brewed cacao is near to pH Neutral (6.4 - 6.8) and is significantly less acidic than coffee. Many people that have had to avoid coffee due to the acidity have happily switched to Crio Bru and have not had any problems. Cacao beans are also very high in Magnesium which helps to reduce acidity in the body.

IS CRIO BRÜ SAFE TO DRINK WHILE NURSING? DOES THEOBROMINE HAVE NEGATIVE EFFECTS ON A BABY?

Numerous studies have been conducted of women eating chocolate during pregnancy and while breastfeeding. They generally state that it is very unlikely that it would negatively affect a baby. Some studies actually suggest that theobromine might actually help milk production in mothers. However, “mother knows best” is always the best maxim to follow. If you sense that you or the baby might be sensitive to the theobromine, then you may want to cut back or stop drinking Crio Brü while nursing. 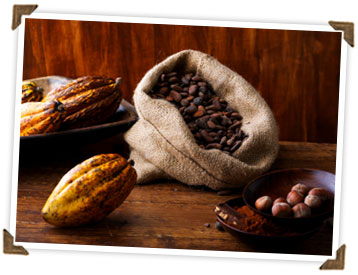 WHAT ARE THE INGREDIENTS IN CRIO BRÜ?

DOES CRIO BRÜ HAVE CARBS?

Crio Brü only has 3 grams of carbs, and none of it from sugar. You can learn more about the nutritional contents and benefits of Crio Brü here.

WILL CRIO BRÜ HAVE AN EFFECT ON MY CALCIUM LIKE COFFEE DOES? 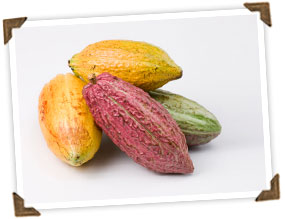 WHAT IS AN ORAC SCORE?

An Oxygen Radical Absorbance Capacity (ORAC) score is a test tube analysis that measures the antioxidant levels of food and other chemical substances. If a food has a high ORAC score, then it means the food is high in antioxidants. The antioxidant’s strength is its ability to eliminate oxygen free radicals. With the ORAC score, a higher score means the food is better at helping us fight diseases such as heart disease and cancer.

WHAT IS THE ORAC SCORE OF CRIO BRÜ PER GRAM WT?

HOW DOES CACAO MEASURE UP TO OTHER FOODS?

I SEE SOME SMALL DOTS OF OIL RISING TO THE TOP OF MY CRIO BRÜ. I THOUGHT THERE WAS NO FAT IN CRIO...?

Great question! You are correct, since Crio Brü is made with one ingredient - cocoa beans - the essential oils contained in cocoa beans are part of the brew.

When we had it tested by a nutritional lab, they found that the percentage of fat was so small per serving, it essentially contained 0% fat. which is what they recommended for the label.

The good news is that for the fats it does contain, most of them are the healthy fats such as those you'd find in olive oil, nuts and avocados.

And over half of the "neutral" or "bad" fat content is made up of stearic acid which has been shown to have a neutral impact on both weight gain and high blood pressure.

In short, when you brew Crio Brü there is a total of 71% “good” and “neutral” fat with only 29% “bad” fat. Even though you can see a little of the oils or fats when you brew it, most is the good fat and it comes in such small quantities per serving that registered as 0% during FDA testing.

IS CRIO BRÜ ORGANIC?
Crio Brü goes to all possible lengths to ensure that the cocoa beans we source are organically grown and purchased at Fair Trade prices and Fair Trade practices.  Crio is exploring the possibility of obtaining USDA Organic Certification on it's line of products in the future but as many growers are very small we would rather have a high quality bean than push the growers to pay the high fees needed for certification. In short : All of our varieties are organically grown but some of the countries that we source from do not offer organic certifications. We do buy organic certified beans when possible. 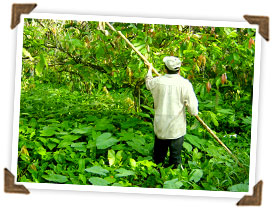 Crio Brü is committed to always paying fair trade market prices or higher to its growers, even if the producer is too small to pay the Fair Trade verification fees.

HOW MUCH IS SHIPPING ?

CAN I RE-USE THE GROUNDS?

Yes, similar to coffee grounds, Crio Bru grounds make great compost; they contain iron and magnesium that make a good additive to your soil. However, please ensure that pets don’t get into the soil, as it could be very harmful or even fatal.  Crio Bru is chocolate, which contains theobromine & is toxic to dogs.

Crio Bru grounds also make an excellent skin exfoliant. Or add them to shakes or your favorite recipes for added nutrition and fibre!
The most popular choices are smoothies and brownies.